Our family-friendly festival took place over the August bank holiday weekend, bringing together over 600 people for a fun-packed event.

Our lively line-up of bands on the Saturday night included over twenty bands - from soulful singers to rocking cover bands and some of Surrey's biggest up and coming talents.  For a reminisce about our line-up check out the youtube list at the bottom of this article.

As ever, the event was accompanied by camping and stalls for food, drink and treats - providing something for everyone from small toddlers through to die-hard party-goers!

We are extremely grateful for the support of all those who were able to join us on the day, which raises money for our fantastic causes.  We couldn't have done it without your enthusiasm and dedication to partying for Patrick!

The Foundation's Louise Evans was interviewed on Susy Radio to talk more about the event and what we're doing with the money we raised.  To hear her interview see here.

The Poet Junkies will be joining us again at P4P 2016 and will be looking to light up the main stage with their highly anticipated new EP, ‘Should’ve Been a Leader’, which is only weeks away from being released.

The Poet Junkies, a four-piece indie rock band from Plymouth, have been taking the South-West by storm and after a very successful 2015 playing headline shows in London, MTV Crashes Plymouth and gaining another BBC Introducing Track of the Week, along with P4P 2015, 2016 is set to be even bigger and better!

Victoria, a five-piece from London, will be gracing our main stage again this year, sharing their latest EP, ‘Distant Nights’. Victoria’s popularity is soaring and they will be making their debut at Glastonbury this year, having already supported Newton Faulkner on his sell-out tour.

"A London based phenomenon, the group’s soaring songwriting is imbued with an epic sense of ambition. Crisp electronic production matched to a real pop nous, the group have already earned admiring glances." - Clash

We are delighted to be welcoming Chasin Vegas to P4P this year. Chasin Vegas are an anthemic, British rock inhibiting four-piece, from East-Anglia. Their latest single, ‘Blue Eyed Skies’, has received a lot of interest on the music scene and we cannot wait to hear them live! A busy summer awaits them, playing a number of festivals around the country.

The  amazing London-based Lauren Ray performed an acoustic set at P4P2015, playing her beautiful debut single, ‘Come to me’. We welcome her back onto the main stage this year to share more of her stunning songwriting talents and fantastic vocals. Lauren’s music reflects her migratory life and her songs often reflect this. Lauren’s debut album, We Will Need Courage, is due for release on July 1st and we cannot wait to hear it at P4P 2106!

Hope is a young singer/songwriter from St Albans, UK. Last year, Hope played at P4P and amazed the crowd with her voice and piano accompaniment; we look forward to welcoming her back this year!

YouTube has attracted the majority of Hope's success to date, with her version of the classic 'Time To Say Goodbye' reaching 100k views in under two months. Her song 'So Much More' was featured as BBC Introducing BHB 'Track of the Week' in 2014. She has also performed at fabulous British music venues such as Hertford Corn Exchange, The Horn - St Albans, Trestle Arts Base and festivals including P4P 2015, where she amazed the crowds with her beautiful voice.

Lauren Rich is a singer-songwriter who certainly knows how to weave her distinctive voice around an effective acoustic chord pattern. With a taste for harmony and autobiographical lyrics that mean her songs border on country, Lauren is an artist with a bright future. Lauren will be joining us for the first time at P4P and we can’t wait to hear her live!

Sarah Lappert is a new and dynamic artist performing original acoustic music infused with a healthy dose of folk, soul, and country vibes. She will be making her debut at P4P this year.

Van Susans are renowned for creating powerful, upbeat and hook-laden songs, packed full of soaring guitars and anthemic melodies and their latest single,SEAGULLS, doesn’t disappoint. They are not to be missed live and have performed at P4P for the last few years! We can’t wait to have them back at LMEQ.

The core songwriting trio consists of frontman Olly Van Andrews with his rich, gravely vocals and trusty acoustic guitar; Ed Dullaway on piano and guitar (often at the same time), and classically trained Holly McLatchie, the Scottish femme fatale on violin, with Innes Christie and Harvey Simpson completing the quintet.

Born in Dublin and now based in London, Fjokra and his eponymous band have gained a reputation for exhibiting a uniquely bizarre and energetic live show that ‘combines near-minimalistic, lo-fi electro-pop with retro swing, metal and occasional epic Muse-like explosions’ (Time Out). Gracing the stages at Isle of Wight Festival, Shambala and Liverpool Sound City, Fjokra was also hand picked by Adam Ant as support for his London show late last year.

Fjokra will be making his debut at P4P this year and we know he is going to be a huge hit!

Andrew Maxwell Morris is a singer/songwriter/composer, and a well-travelled soul from Leatherhead, who played at P4P2015 along with great live performances at Glastonbury, where he will be returning this year!

Andrew released his debut album Well Tread Roads on Monday 5th May 2014. It is a project that explores the highs and lows of creating music with the demands of a full time job, giving up evenings and weekends and being dedicated to the task. The album is a rollercoaster of driving pop/folk and acoustic songs, each with its own identity.

As well as his album and two EP’s, Andrew has had success with music placements in TV adverts for two major brands, Thatcher’s Cider and Vodafone. He has written for production music companies and films around the world including EMI and Imagem.

Joe Garvey will be making his debut at P4P this year. He is a very talented and local singer-songwriter from Kingston. Joe has already had his music played on ITV’s ‘Take Me Out’ as well as playing on London Live TV. We look forward to welcoming him and his band to LMEQ on the Sunday. Check out his awesome new video- it rocks!

Alex is an 18 year old singer/songwriter from Crawley, England, who lives to sing. Alex is inspired by RnB, Soul, House and Garage and likes nothing better than putting her pen to work with a thumping bass line on a cool mix!

She has worked with world-renowned music producer Bill Kimber who had produced and managed artists such as Bucks Fizz, Natalie Imbruglia, Annie Lennox and The Eurythmics, to name a few. We can’t wait to see Alex at P4P with her thumping bass lines and awesome voice.

Cascars Street Band are a 4-piece covers band from Reigate. They play a range of Rock ‘n’ Roll, Soul, Rock, anything! And play very well! They can often be found in local pubs and events getting the party going. We are very lucky they are able to join us at P4P 2016 and look forward to them getting the party going!

On The Run are a professional duo playing a range of music for all occasions, with accoustic and electric sets.

Their musical influences include Fleetwood Mac, Razorlite, Status Quo, Pink, Eagles, Dire Straits, Adele, Lady Gaga, Duffy, Pixie Lott, Lily Allan, Kings of Leon, Rihanna, Alecia Keys, Calvin Harris, John Legend, Sam Smith, Emeli Sande, Farrel Williams and many more. With new materials being added each month, your are sure to recognise one of your favourite songs and we look forward to hearing ours at P4P 2016!

Unprovoked are returning for another year at P4P. Having recently reached the finals of both Battle of the Bands for covers and original songs we are excited to welcome them back. Unprovoked are a 4 piece funk-blues rock band writing their own material and also covering tracks from Ed Sheeran to Jimi Hendrix. 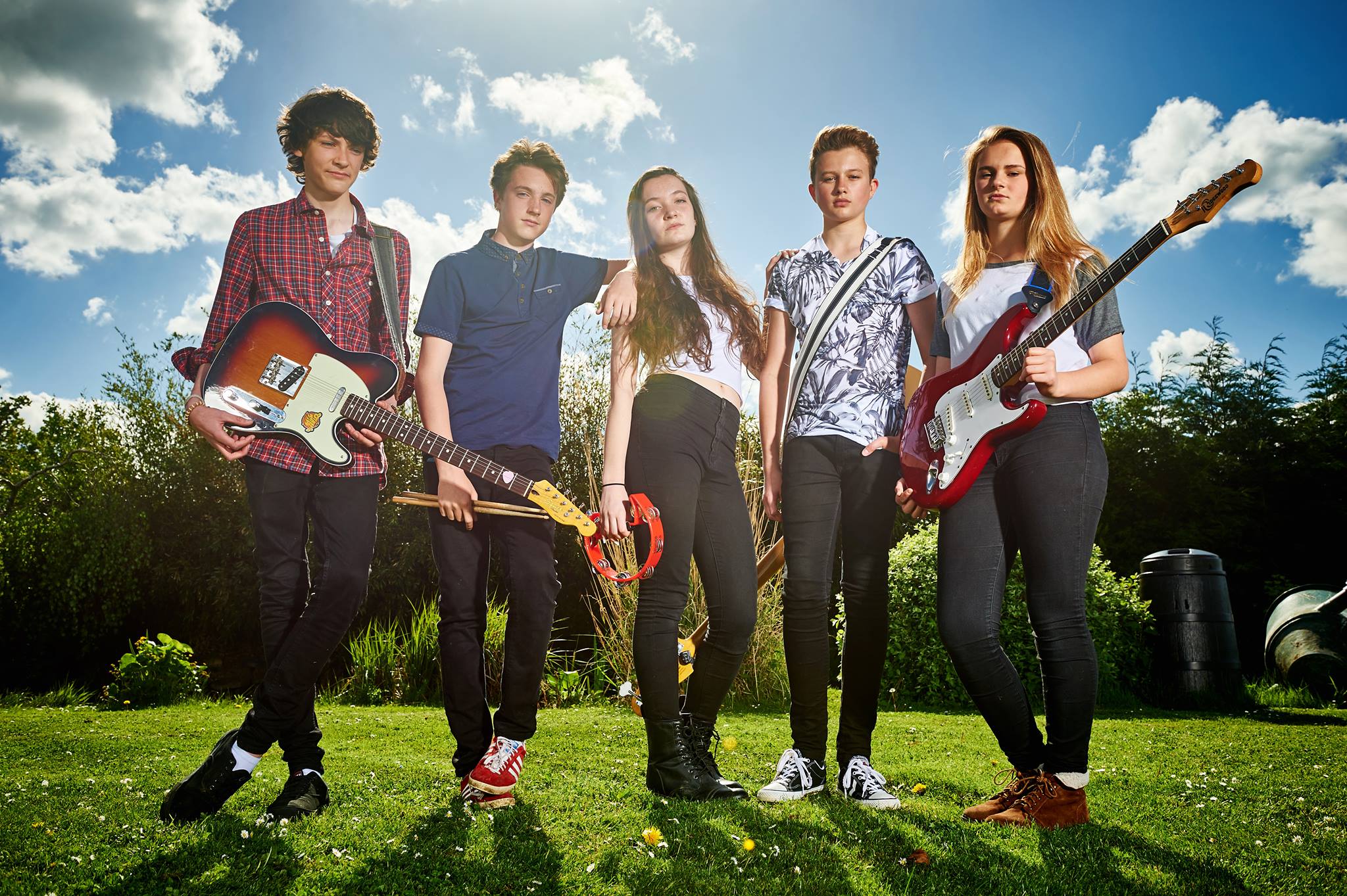 Flanchford are as local as you can get! As their name suggests they live just along from LMEQ and we are delighted to welcome such young and local talent to P4P! Flanchford are a 5 piece rock band who have been playing together for over 6 years and play a mix of rock covers and originals! They regularly play at local events including Reigate Priory Park for the Queen's Jubilee, annually at the Brockham Music Festival and for the Wheels for Troops charity festival at Redhill Memorial Park as well as a number of other local events, building up a good reputation as a talented young local band. We look forward to welcoming them to P4P this year.

Last year, Martin Luke Brown joined us for a fanstastic set, in between performances on the BBC Introducing stage at Reading and Leeds over the bank holiday weekend. We are honoured that he will be headlining on Saturday night this year having just toured Europe with Jack Garratt.

Describing himself as a gritty, souly, hippie boy, Marting Luke Brown combines influences such as, Stevie Wonder, Michael Jackson, James Morrison, Foy Vance, JP Cooper, Gavin DeGraw, John Mayer, Joss Stone and Sam Cooke into his own honest and heartfelt music that is grabbing the attention of music fans all over Europe.

The one and only Millie McCarron will be playing at P4P 2016! Millie returns to P4P for yet another year, with a mix of her own original songs and covers of popular hits. Check out Millie’s original song, ‘Summer Festival’, from P4P 2014. Millie wrote this great song having played at P4P 2013!

Nick Edward Harris is a singer song-writer who has performed at Wilderness, Cambridge Folk Festival, Glastonbury and Green Man, as well as a number of P4Ps! His incredible voice and fantastic guitar playing is not to be missed!
His latest album, ‘The Tall Trees’, is a personal triumph, it is warm and gentle yet emotionally visceral, it is familiar yet individual and most importantly it is not to be missed. The album has been met so far with great acclaim, gathering widespread support from Clash Music, Q Magazine (Calm Your Demons - Track of the Day) and BBC 6 Music.
www.nickedwardharris.com/

Indie-based, Brighton band, Frankie Furkow will be joining us on Saturday night this year having played at P4P 2015.
Frankie Furlow deliver beautiful songs via heart felt vocals and stellar performances you cannot take your eyes off. Frankie Furlow are gaining more and more traction and support via deserved radio play, festival appearances and constant gigging in the UK and Europe.
frankiefurlow.com/

Joe Waller is a young singer songwriter from the South of England. Joe’s distinctive soft tone has been attracting a growing fan base since he first performed just over a year ago. Combining beautifully crafted lyrics with a unique, soft and gentle tone; Joe will have you feeling emotional one moment and overwhelmed with joy in the next. Joe will be joining us on Saturday night at P4P and we look forward to welcoming him!
www.joewallermusic.com/
www.facebook.com/joewallermusic/timeline

Susie Lopez is joining us again this year at P4P 2016. Last year Susie and her band entertained everyone from the main stage but this year she will be playing on Saturday night and really getting the party going! Susie Lopez is originally from Redhill and has an incredible voice. Her range of covers and original songs are awesome and well worth a listen.

The Soul Searchers are a local covers band playing soul, blues, rock and pop. They have great energy when playing and we can’t wait to dance the night away with them on the Saturday of P4P 2016.